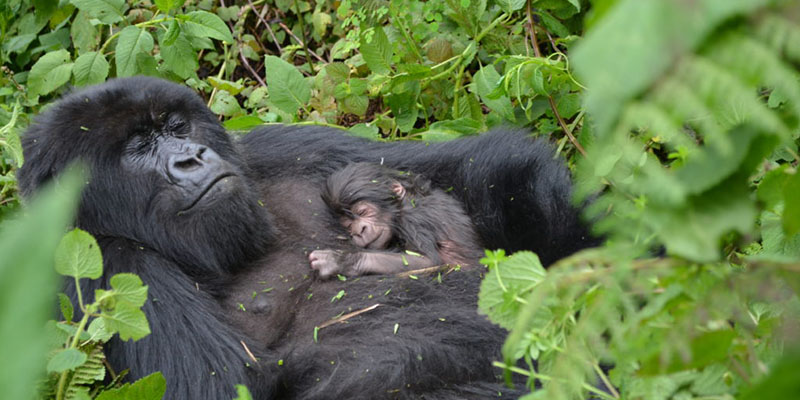 Gorillas are classified as warm-blooded mammals who are able to hunt down their food in different places through the use of 5 major movement mechanisms. Some of the tourists who have never seen gorillas move wonder how they do it in search of better places for accommodation or food or fleeing from danger. In this blog, there are mainly 5 major movement mechanisms of gorillas that are explained in detail and how they support in feeding and playing with the infants.

Mountain gorillas are more blessed than humans when it comes to the mode of movement, humans only walk (bipedally) on two legs as well as gorillas have four more ways of movement. This is mainly according to their current situation/stage the gorillas are going through.

The movement mechanisms among gorillas are very important to their survival in their habitat since occasionally these apes are required to switch from one movement mode to another in order get what they need at that moment like food and maybe fleeing from danger.

According to the study of the mountain gorillas, there are mainly 5 movement mechanisms in gorillas;

Gorillas are mostly known to live primarily on the ground however they take some time while in the trees of about  5-20% of the day. Mountain gorillas love to play or harvest fruits from the trees through one of the 5 major movement mechanisms of gorillas (tree climbing). These apes make use of all their four limbs to grasp when climbing trees in support with the strong claws and the big toes. A big percentage of young gorillas spend more time in the trees than adults in trees and like to play there in the big trees with many branches. Unfortunately, adult Virunga gorillas very rare tp climb trees as well as silverback males due to their heavyweight.

Western lowland gorillas are the commonest who spend considerably much time in the trees.  However, they can climb if the trees have fruits and as long as the tree branches can support their weight.

Gorillas are highly known to move on both the feet and hands but at times, they walk on two legs. This movement mechanism is much common in juveniles or even adults while carrying the infants or manipulation of food and trying to pay attention to something at a distance. However much, adults walk but it’s on a rare occasion and may do it for a few steps. The adult gorillas walk in case they are going to beat their chests and engage in an encounter.

The body of the gorilla is supported under the forelimb.  This is due to the support of the longer arms than legs, a short stable lumbar spine, long curved fingers, and reduced thumbs. The process of brachiation involves jumping from one tree branch to another tree branch while wandering in the forests looking for food especially, the abundance of food sources. Luckily enough, gorillas eat many different types of plants which helps them not to travel far distances looking for food. In other words, gorillas travel less than one mile per day on average than humans.

At times this mechanism is referred to as knuckle-walking, in which the forelimbs hold the fingers in a partially flexed posture that allows body weight to press down on the ground through the knuckles this also prevents it from stumbling. It also implies that they walk on top of their knuckles rather than putting all their weight on their palms. Of all the 5 major movement mechanisms in gorillas, knuckle-walking is the famous one applied by the majority.

Gorilla babies are almost like human babies, they need a lot of support in everything they engage in when they are born.  In the first days of birth, the gorilla mother lays the baby on her stomach as she supports with one arm while walking (on three legs). As the days go by, the baby gorilla gains some strength to grasp on the mother. Finally, when the infants start climbing the mother’s back, it walks normally on the four limbs (quadrupedally). They start enjoying the short rides on their siblings in case they ain’t the firstborn. On a rare basis, mothers practice leg carrying when the infant is to be carried and sit on the mother’s back.

Where are mountain gorillas located in Rwanda?

Mountain gorillas are among the famous apes in Rwanda and the highly visited.  Tourists visit Rwanda for gorilla trekking and study their social behaviors. These endangered subspecies are protected within Volcanoes National Park in Rwanda. The park is open for both residents and non-residents as long as you own a gorilla permit for you to observe the 5 major movement mechanisms in Rwanda.

Much has been known about mountain gorillas in Rwanda, both past and the upcoming trekkers…

How difficult is Gorilla trekking in Rwanda?