The 1 Day Gorilla Trek Rwanda Safari is a short safari excursion to the Volcanoes national park in Rwanda. This tour starts and ends in Kigali the capital of Rwanda. You will leave Kigali very early in the morning, heading towards the Volcanoes National Park which is a 2-5 hours journey driving northwest of the country. 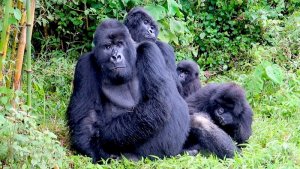 Very early in the morning, you will be picked from your Hotel or Lodge (with your packed breakfast and lunch). You will leave at 4:30 am to start on your 2 hours (116km) journey to the Volcanoes National park in Musanze province, Northwest of Rwanda.

On arrival at the park headquarters, you will be briefed by park officers about the essentials of gorilla trekking and then be assigned to a specific gorilla group to track for the day. You will then be led into the forest by a ranger guide to begin the search for the primates.

The Gorilla trek in Volcanoes National park usually takes between 30 mins to 8 hours to meet the gorillas. This largely depends on the movements of these primates. You will be given a full hour (45-60 minutes) to spend with the gorillas while enjoying photographic moments with them (BUT WITH NO FLASH). After the 1hr which seems to be like minutes, you will be led by the guide out of the forest and then transfer back to Kigali for your flight back.

End of the Tour

These gorillas live in groups led by giant silverbacks. These groups are non-territorial; the Silverback generally defends his group rather than his territory.” According to Wikipedia, “The mountain gorilla is highly social and lives in relatively stable, cohesive groups held together by long-term bonds between adult males and females. Relationships among females are relatively weak. Mountain Gorilla life span is 40-50 years.

What to Carry For 1 Day Gorilla Trek in Rwanda

This Gorilla Tour in Rwanda will require you to have the best recommended equipment for a gorilla trekking safari. These among others include;

What's Included in The Tour?