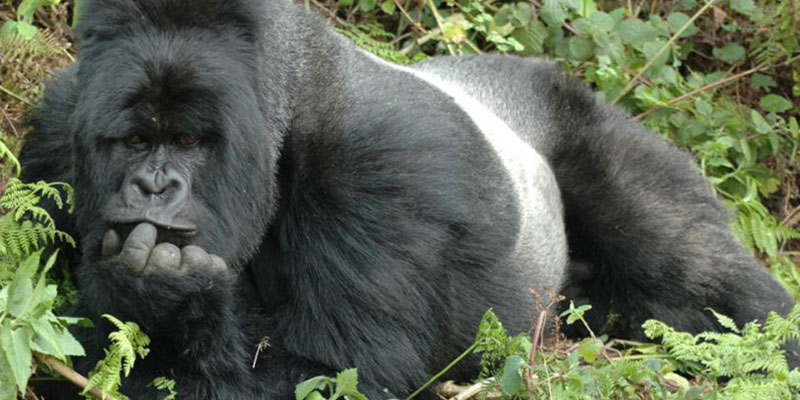 The mountain gorillas are large hairy human-like creatures with a broad chest and shoulder, identified to be the largest primate living on this planet. The gorillas are also marked as the second closest cousins of humans after the chimpanzees. This is due to the fact that these amazing and intriguing primates share up to 98% human DNA evident in their human-like behaviors and emotions, such as laughter, protection of young ones, and displaying moments of sadness when sick or lose a member.

The gorillas also have human-like hands and a top-fold over their small eyes that are set into hairless faces and a ridge of bone running from front to back on the top of the skull.

These mountain gorillas live in groups known as troops and each troop is led by an adult male mountain gorilla called the “Silverback”. The reason they are called silverback is because of the silver saddle of hair on their backs. These long black hair and thick, shaggy coats that help to keep them warm in cold climates. The silver hair developed is truly a resemblance to the grey hair developed by humans when they grow old.

Yes, that’s true, mountain gorillas are undoubtedly the most endangered primates. With only 900 species remaining in the world, these gorillas can only be found in the tropical rain forests of East and Central Africa. The gorillas protect themselves from danger by standing erect on its hind legs, tearing up and throwing plants, drumming on the chest with its hands or fists, stamping its feet, striking the ground with its palms and groaning sounds.

Why Do People Trek the Mountain Gorillas Today?

A number of reasons that make gorillas so attractive today have been pointed out; mainly the natural and human threats that sound them and thus a belief of being extinct have largely contributed to gorillas’ large attraction in Africa.

The lowland gorillas are believed to be at the risk of a heart condition known as “fibrosing cardiomyopathy” which is a condition where the heart muscle is abnormal and is a common cause of heart failure and/or sudden death in middle-aged or elderly great apes, especially in males.

Gorillas in all parts of the world are dying and the causes confirmed to be a disease, a diet, and a plant. 70 percent of deaths of the male gorillas that is; older than 30 are as a result of heart disease, mainly Fibrosing cardiomyopathy. Scientists believe that it might be a bacterial or viral infection of the heart that’s responsible for the condition.

Poaching, hunting, trading, and consumption of gorillas in countries like Congo Basin countries where most gorillas and other apes are found continues unabated due to a lack of enforcement of national and international laws, together with ineffective judiciary systems.

In central and West Africa there is a high demand for bush eat commercial trade especially for ape meat which is a threat to gorillas today. The consumption of ape meat is considered to be prestigious amongst the wealthy elite. Getting to know the exact numbers of gorillas towns poached is complicated because they are often butchered and eaten on the spot, or their meat is smoked and later
taken to for sale.

Gorillas have low reproductive rates means that even low levels of hunting can cause a population decline, which could take many generations to be reversed. Gorillas are also frequently killed by traps and snares intended for other forest animals such as antelopes.

Gorillas are also said to be used for Traditional medicine and live animal trade. They are hunted after as pets or trophies and for their body parts, which are used in medicine and as magical charms.
There is rapid destruction of forests for road-building activities, commercial logging interests and for subsistence agriculture; making it harder for gorillas to maintain their lives.

Gorillas and other Apes are responsible for the spread of infectious diseases, notably Ebola and in the early 1990s; Ebola hemorrhagic fever outbreak was have caused large-scale die-offs of great apes. The outbreak of Minkébé (northern Gabon) in 1994 wiped out the entire population of what used to be the second-largest protected population of gorillas and chimpanzees in the world.

The Ebola virus claimed many human lives in the north of the Republic of Congo between 2002 and 2003 and at two study sites in and around Odzala National Park, 95 percent of the 600 identified gorillas died likely as a result of the same virus.

Looking at a positive note; the gorilla trekking tourism industry has a large positive impact on the communities in and around the national parks. Tourism offers employment and economic benefits that create positive spin-offs for gorilla conservation. The local people benefit a lot from gorilla tourism since now the gorillas are increasingly seen as income-generating animals that are expensive as long-term tourist attractions.

With the growth in local investments, both economic and social, provide a drive to protect the gorillas, so that the rewards continue in terms of education, health care, and economic motivation. Today gorillas are now being conserved compared to before when they were as viewed as sources of food, unfortunate casualties in hunting snares, competitors for habitat hunting trophies and targets for unsustainable cash injections from poaching. In most cases, former poachers are now game rangers and work as anti-poaching patrols that play a vital role in keeping the gorillas alive.

A tourist who wishes to see a gorilla goes through the following steps;

Volcanoes National Park is one of Africa’s parks near a city, it is about 2…