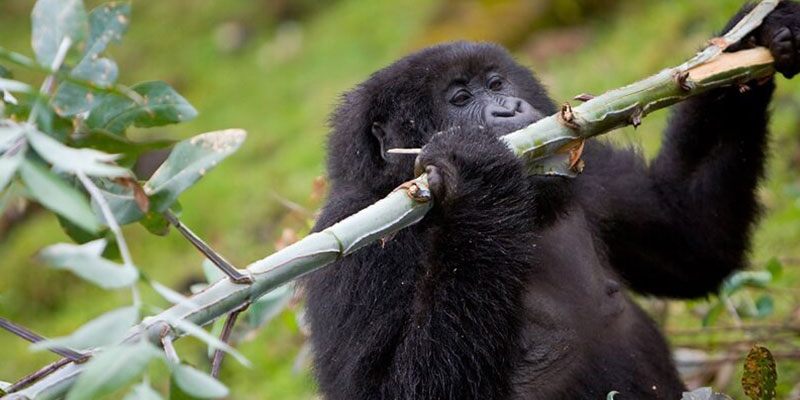 Mountain gorillas are one of the highly endangered primate species living in the world with only 900 species remaining! Despite some folks claiming that this population is on the rise recently, the future of these enchanting primates is in real danger and this explains why organizations such as the Dian Fossey Gorilla Fund and the International Gorilla Conservation Programme (IGCP) have come up to preserve the reign of the gorillas. In this article, we bring the top 7 interesting facts about mountain gorillas that you probably didn’t know.

The Gorillas are really unique and special creatures sharing 98% of the human DNA. This is evident in the way they behave, their intelligence, how they protect younger ones and how sensitive they are towards any possible danger.

No. 2: Mountain Gorillas Are Only be found in Africa

No. 3: Mountain Gorillas Are Shy and Strong

According to locals living near Bwindi Impenetrable National Park, mountain gorillas are as strong as they are shy. Locals here proclaim that a mountain gorilla will never chase you when you are facing it and looking directly into its eyes. However, you should know that when threatened they can be aggressive. They beat their chests and let out angry grunts and roars. Group leaders will charge at the threat and mothers will fight to the death to protect their young.

No. 4: Mountain Gorillas Are Herbivores

You might be surprised to know that mountain gorillas feed mainly on leaves, shoots, and stems. Due to their diet, the lush, green forests found in the mountains are perfect for these amazing primates. But, with approximately 4 million people living within one day’s walk of Virunga National Park, habitat degradation for charcoal production and agriculture development, for example, is putting pressure on the natural resources found in the mountain gorilla’s natural habitats.

No. 5: Mountain Gorillas Live in Groups

These amazing primates can never be found when not in a group. These groups normally range between 10-30 members. The largest gorilla group or family ever studied is in Rwanda and is led by Cantsbee (now 38 years old!), who is the oldest known mountain gorilla in the whole world. A gorilla family is led by a silverback. These troops also include several younger males, adult, and juvenile females, and infants.

In order to protect the members of the group, male gorillas, silverbacks maintain order and decide all activities within their troop. They schedule feeding trips, resting time, and travel. They also father the majority of the young in the group. The name silverback originates from the silver-grey hair stripe developed by male gorillas when they age up. This silver hair can be compared to the grey hair that humans develop.

No. 7: Female Mountain Gorillas Can Start Conceiving at 10 years

Female gorillas are studied to carry one or two babies at ago with a gestation period of eight and a half months. These females can even start conceiving at 10 years which isn’t a case with humans. In general, mountain gorillas can give birth to two – six offsprings in their lifetime.

Want to discover more interesting facts about gorillas? Why not book Rwanda Gorilla Tours with us for a chance to meet these endangered giants in the jungles of the wild. We have customized gorilla tours and gorilla trekking safaris to Uganda, Rwanda, and DR Congo.

What is the Best time to go gorilla trekking in Rwanda?