Karenge Bush Camp is located in Akagera National Park and its set up two times in the year and removed out hence leaving no trace of its being. This is why it’s called seasonal. Between this campsite and the lodge is a karenge and its aim is to leave a light footprint on the earth, echoed in the name Karenge that means little foot. 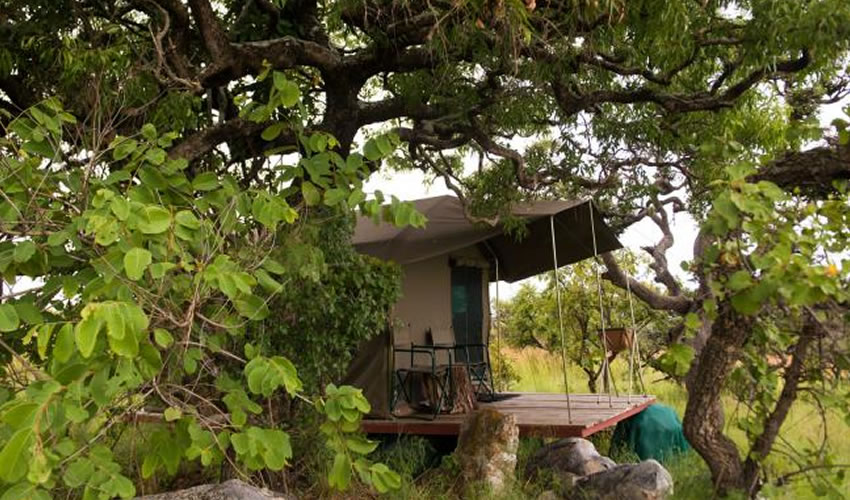 The camp was named after the river that flows along its eastern boundary and the park that has got a diverse land scape as well as great biodiversity. Whether on day or night game drives, you can keep an eye on the eland, topis, giraffes, impalas, roan antelopes, sable, zebras, crocodiles, lions, leopards, primates and over 500 bird species. A boat cruise is also a good opportunity of viewing many water species.

The lodge accommodates only 12 visitors that are to live with in the 6 tents that contain camp beds as well as the beddings, solar lights, camp chairs and the reed matt floors. Each tent has got a rural out door bath room with a hot water delivered on daily basis. Breakfast, lunch and dinner is also included with in the rate and are served in the dinning tent each day. You can enjoy the excitement of staying in a pop up camp that moves around Akagera National Park.

This seasonal pop up camp which shows the different areas of Akagera National park.

Its intentions is to leave a light foot print on earth

The park is not so crowded and its often undervalued, home to 500 species of birds.

The camp houses 12 guests, and this means that the guests can enjoy an intimate safari adventure.

The meals are also included in the rate.

The wordkarenge also means a small foot in Kinyarwanda language. It supports well with the camp’s goal to be ecofriendly and leaves as small environmental foot print the camp’s goal to be so ecofriendly and leaves as a small environmental foot print as possible. The camp is a seasonal camp and its only for period during each year and changes locations each and every time. This camp is constructed with the ecofriendly materials that are all removed when the camp is decomposed at the end of season.

The camp was opened in 2016 and was opened from June to August and December to February 2017. The tents are also raised which reduces the risk of animal entry, and also increases safety. Each of the tents has two comfy beds, the couple lamps as well as the standard hotel room usual basics like the towels and the toiletries.  Each tent accommodates only 2 people.